One of the more distressing symptoms of facial aging is the developement of jowls, which completely destroy the
line of the jaw. Jowls appear as pouches of fat, which can usually be seen on the jawline halfway between the chin
and ears. 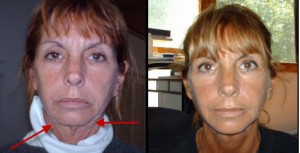 The image on the right has been taken from a selection of “before and afters” from Cynthia Rowland’s Rejenuve site. The photo on the far left demonstrates how saggy pouches known as “jowls” form along the jaw;
the photo on the right shows that facial exerces can reduce the appearance of sagging jowls considerably.
If you would like to know more about Cynthia’s Facial Magic program, see Facial Exercises by Cynthia Rowland.


Below is a selection of YouTube Facial Exercise Jowls videos.